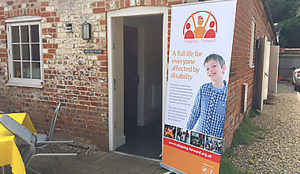 Our Disability Advice and Support Service is busy supporting people to access DLA and PIP as well as support for specialist equipment, furniture or other items. Changed circumstances may mean that people may be entitled to new forms of support, eg Carer’s Allowance. Contact us at info@stepping-forward.org.uk to make an appointment.

The film ‘The Reason I Jump’, inspired by Naoki Higashida’s book of the same name, was released in the USA this weekend. Jes & her mother Mary Penn-Timity – co-Director and founder of the Sierra Leone Autistic Society (SLAS) feature. In response to offers of support as a result of publicity around the film, SLAS […]

The DLA/PIP service continues by phone for now. We know that lots of people are experiencing changed financial circumstances. If you are not sure if you may be entitled to support, eg for Carers Allowance or Universal Credit, contact us for a telephone appointment with our Benefits Adviser. Email: info@stepping-forward.org.uk and we will get back […]

We use cookies to ensure that we give you the best experience on our website. If you continue to use this site we will assume that you are happy with it.Ok